The Raimi trilogy had its second installment hit the peak for the series, did the same happen here?

Why I Saw It: I saw the reboot when it hit theaters, and I absolutely loved the faithful interpretation of the character. There was no chance I’d be skipping the sequel.

Even with the criticism I’m prepared to write about this movie, make no mistake, I still really enjoyed the film. In some ways it was better than its predecessor, but not in enough ways to earn it a better score.

Where did this movie fall short of its predecessor? This is a movie about a comic book character, and while that necessitates a certain amount of the suspension of disbelief, I rolled my eyes a few times during the film. That didn’t really happen in its predecessor. Here’s my attempt at explaining that notion without giving away any critical spoilers:

Danger? What danger? What is it about people in this movie not taking danger seriously? During a high speed chase where Spidey is trying to stop a dangerous guy with some dangerous and important cargo, Spidey stops to help a pedestrian. That’s all well and good, but he proceeds to talk to him for what seems to be five minutes before getting back to the on-going chase.

At another point, an even more dangerous villain is slowly coming down the street, and despite the fact that he’s got machine guns and seems intent on destruction, what do the people do? They stand behind a barricade and watch the standoff. Normal people would treat this scene like something to run away from, but these people? They act like someone’s filming a movie and they want to watch. One of them thinks so little of the danger that she sticks around despite having a young child with her, and watches the child well enough that the kid wanders into the action. When Spidey shows up to help with the situation, he takes a minute to talk to the kid right in the middle of the danger zone. But at least the big baddie is willing to sit back and wait.

Another scene involves the lengths to which Peter Parker is willing to go to keep Gwen Stacy safe… and the point at which he decides she can help… but I won’t get into that because it involves too many spoilers.

Roosevelt. The mystery that Peter identifies and solves over the course of a few minutes and the related scenes missed the mark. Some of the scenes seemed like they should’ve been included into the previous Amazing Spider-Man film, especially if they were going to be such minor details in this film. The scene on the plane was a bit ridiculous (unless you’re okay with the idea that people of all walks of life should be good at hand-to-hand combat and using a firearm). The payoff for the elaborate sets they built and the scenes which directed the viewers along the plot? A very short scene with a very small bit of information which barely moves the plot along at all.

The portrayal of Peter Parker by Andrew Garfield is top notch and really brings the character to life, straight from the pages of the comic book. He’s witty, sarcastic, geeky and loves being Spider-man. I believe this to be one of the biggest reasons why I enjoy these films considerably more than the Tobey Maguire / Sam Raimi trilogy. 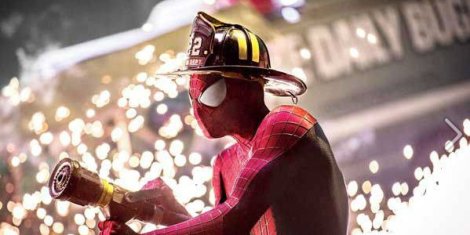 The visuals continue to be an incredible aspect of this series. The way they’re able to present Spidey and his abilities is incredible. Whether it’s swinging through cityscapes or traveling the path along which the web has been slung or his contortionist movements, it’s all amazing. While it shouldn’t come as a surprise that in 2014, we could get a movie which has these types of visuals, there are other films I could reference which fall spectacularly short in that regard.

Not that there was any doubt there’d be a sequel, but this film sets in place plenty to look forward to, and it does so effortlessly. The bits which were dropped along the way involving the Sinister Six didn’t seem forced at all.

At times I might have issue with the way the story unfolds, it’s still a great story without much downtime. If you look at the adventure Peter Parker takes in this film, at a high level, it’s fairly well written. Maybe it’s not a masterpiece, but it’s still well-crafted.